Elsenz comprises fluoro calcium phosphosilicate which is an improved form of bioactive glass. Elsenz forms acid resistant fluorapatite and releases fluoride over a period of 8 – 12 hours. This combined action of apatite formation and ion release makes Elsenz a unique toothpaste to use for remineralization.Builds a armour like protective layer on teeth 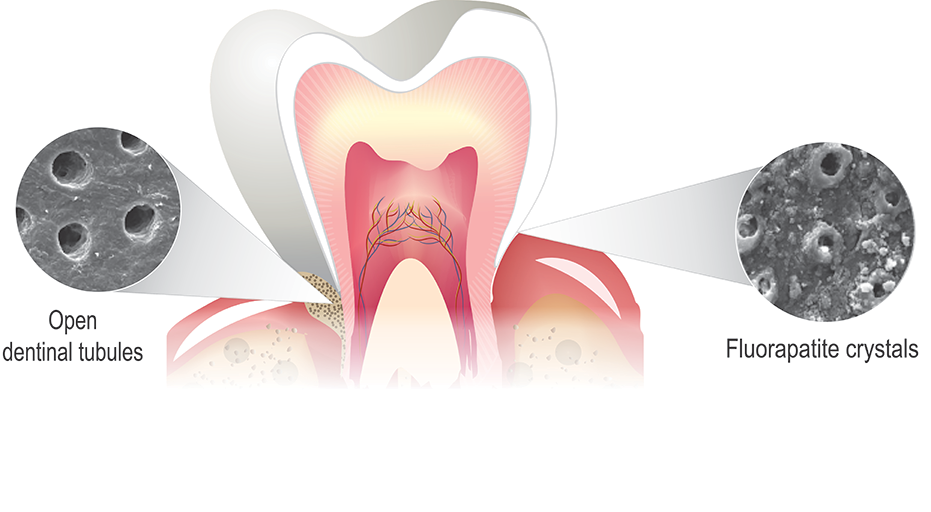 The particles of Elsenz are designed to be small enough to enter the dentinal tubules where they convert to either fluorapatite or apatite mimicking the natural biological mineralization process of enamel. The smaller particle size also reduces abrasivity of toothpaste which results in lesser enamel wear.

Elsenz is designed to dissolve faster under acidic conditions offering added protection when teeth are directly challenged with acidic food or beverages. Elsenz dissolves quickly, raising the pH and releasing calcium, phosphate and appropriate quantity of fluoride ions to minimize the acid dissolution of the apatite crystals.

Elsenz slowly dissolves to release calcium, phosphate, and small concentration of fluoride ions, up to 12 hours onto the tooth surface to form a acid resistant apatite layer on the enamel for long lasting protection. The slow release of calcium and phosphate helps the natural saliva to replace the minerals lost when consuming acid drinks and foods. Elsenz forms fluorapatite which is more resistant to acid attack than hydroxyapatite and hydroxycarbonate apatite.

Prevents Acid Dissolution During Consumption Of Acidic Foods Or Beverages

Elsenz dissolves faster under acidic conditions than neutral or basic conditions. Thus when faced with an acid challenge as a result of bacteria metabolizing sugars or drinking an acidic beverage, the glass dissolves quickly raising the pH and releasing calcium, phosphate and appropriate quantity of fluoride ions to minimize the acid dissolution of the apatite crystals. Elsenz is designed to dissolve more rapidly with lower pH, offering added protection when teeth are directly challenged with acidic food or drinks.

Conventional fluoride containing toothpaste use soluble source of fluoride which are washed away rapidly by the salivary flow in the mouth. In contrast Elsenz contains a polymer that binds to tooth surface, preventing the bioglass from being washed away. This innovation makes the bioglass-based protection last longer.